Get my new book, You CAN Change Other People
Send me the book

When Dante Alighieri was nine years old, he fell in love with a girl in a crimson dress.

The girl, Beatrice Portinaro, was just eight when the 13th-century Italian writer first laid eyes upon her at a gathering in her father's palazzo. He later wrote, “From that time forward love fully ruled my soul.”

Beatrice didn't pay Dante the slightest attention. And nine years would pass before Dante managed to utter a single word to her during a chance encounter on the streets of Florence. (A moment caught on canvas in the image below, Henry Holiday's Dante and Beatrice.)

And that was it. The only two times they ever met.

Dante never stopped thinking, obsessing, and writing about the semi-divine Beatrice, featuring her in his most famous work, The Divine Comedy. Even after he married someone else and had four children with her.

The story of Dante and Beatrice is heralded as one of the great instances of unrequited love. Chances are, Beatrice didn't have a clue of the role she was playing in the affair, since Dante never said a frigging word to her about his feelings. And when she died in 1290, at the age of 24, after three years of marriage to some other guy, Dante lost his chance forever.

While Dante may have hoped to win Beatrice's heart, he didn't do an effing thing about it. 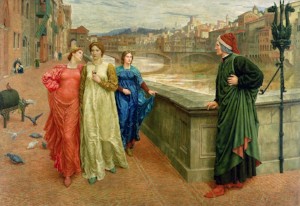 Perhaps shy, tongue-tied nine-year-old Dante couldn't get a few pleasant words out of his mouth at the Portinari Palace, but you'd think that sometime during the next decade he might have made it out with a humble, “Hi, how are you?”

But instead of taking action — risking rejection, or perhaps risking getting to know the flesh-and-blood Beatrice instead of his spiritually perfect imaginary lover — Dante opted for the passive stance of hope.

Hope is a powerful human emotion. And it's useful when it inspires us to keep our chins up and our spirits lifted. But in the immortal words of James Cameron, Rudy Guiliani, or Benjamin Ola Akande (depending on which Google listing you prefer to believe), “Hope is not a strategy.”

That's the thing about hope – it applies only in situations where we don't have control. I hope that traffic will be light this morning. I hope that the electrician comes this week. I hope that a relative I never knew existed dies and bequeaths me half a million dollars.

“I hope I can do it this time”

The most common reaction I hear when I describe the Big Change Program goes something like this: “Oh, I would love to be at my ideal weight and off my hypertension/diabetes/cholesterol/reflux meds. I've tried to lose weight and get fit so many times before. Can your program help me? I really hope I can do it this time.”

You see what's going on here? The very introduction of HOPE dooms the project to failure. Because the internal voice that talks about hope is setting us up to not be in control.

It's understandable. I totally get it. I've fallen in the Hope Trap more times in my life than I can count. But I now see that it's a trap.

When I say that I hope I can stick to a diet or exercise regimen or self-care routine, I'm telling myself that it's not up to me. That my cravings can defeat me. That my inherent laziness can overwhelm my intentions. That my lack of self-discipline can derail my goals.

In the fancy language of positive psychology, focusing on hope shifts the locus of control from internal to external. And so when challenges arise — as they inevitably do when we attempt something new and hard — we interpret them as immovable obstacles rather than temporary setbacks or invitations to raise our game.

Dante completed the Divine Comedy in 1320, just a year before his death at the age of 56. The first part of the work, the Inferno, is a tour of the nine circles of hell. It begins with the inscription found at the gates of hell: “Lasciate ogne speranza, voi ch'intrate.”

Abandon hope, all you who enter here.

The Big Change Program is a stairway to heaven, not hell.

But it's a stairway. Not an escalator.

You've got to take each step.

And the first step is to abandon hope. To give up the illusion that your actions, your choices, your habits, are not in your control.

The most insidious thing about hope is that it lets you off the hook.

Oh well, I tried, but my addiction to sugar is just too strong.

I'm just not a morning person, and it turned out thatI  have no time to exercise the rest of the day.

There's always some emergency at work or at home that requires my time and attention, so I have no time to take care of myself.

Pick up a pencil. Hold it about four feet above the floor. Prepare to drop it. Say to yourself, “I hope this pencils falls down onto the floor. I hope it doesn't float away.”

Feels kinda stupid to say that, no?

That's the thing about getting fit, lean, and healthy. Unless you have a genetic condition that absolutely prevents you from healing, or your chronic disease progression is so far gone that there's no coming back (and if you think that's you, then please check out Dr. Lissa Rankin's Mind Over Medicine and Dr. Kelly Turner's Radical Remission to give you, um, hope), then undoing the effects of poor diet and insufficient physical exertion is a known, predictable process.

When someone adopts a low-fat, whole food, plant-based diet, a bunch of things typically change. They approach their ideal weight. Their blood sugars stabilize. Their digestion calms down. Their blood pressure decreases. Their cholesterol plummets.

When someone starts exercising seriously, a bunch of things typically change. They get faster. They get stronger. Their develop more stamina. Their bodies resist and recover better from stressors.

These consequences are not random, or capriciously distributed by fickle Health Gods. They are natural consequences of natural systems. They are simple cause and effect. 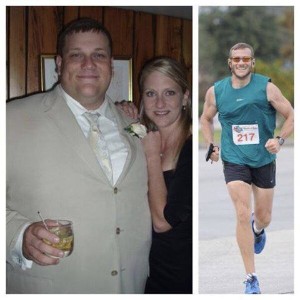 If you've struggled for years and have been on the verge of giving up, then hope is helpful to keep you going.

That's one of the reasons the Big Change Program is so appealing to people; they look at Josh's trajectory, and it gives them hope that maybe they can experience a similar transformation.

If you need some hope to take the first step, then that's the time and place for it. But once you've committed, it's time to Abandon Hope in favor of action.

That's why Josh and I work hard to exorcise your hope as soon as you begin the Big Change Program. In the weekly journal assignments, I'm a hard-assed critic with a red pen, pointing out when members slip into disempowering language. And the most insidious linguistic disempowering invokes Hope instead of just doing the work.

I spent 15 years in marketing. And when you're selling something, the most effective technique is to stoke the prospect's desire by giving them hope.

And here I am, inviting you to join the Big Change Program and succeed where in the past you may have failed, by telling you to abandon hope.

If Dante had abandoned hope and screwed up the courage to say, “Hi, what's up?” to Beatrice, maybe things would have worked out between them. But maybe not. After all, Beatrice had a brain and emotions, and might have found Dante repulsive or, even worse, boring.

But you are dealing with your own actions and habits, not anybody else's. You get to choose how you spend each minute of the day.

And with great responsibility comes great power, if you choose to accept it.

I can't guarantee that you'll lose weight, or improve your health, or turn into a competitive athlete like Josh. I can't control what you do, so I have to hope that you'll take action and prove me right.

If you've always failed in the past, it's because you lacked certain mindsets and strategies for success. Those, we will teach you.

We set the table. But you have to sit down and eat.

Will you abandon hope, and make 2017 your best year ever?

Read all about the Big Change Program, and register here: http://BigChangeProgram.com.

PS The Big Change Program starts in January. Just a couple of weeks left to grab your spot.

PPS The name “Beatrice” comes from the Latin beatrix, meaning “she who makes happy.” The trick to Big Change is to internalize our own beatrix. To act in ways that make us happy, and also to treat our bodies in ways that show love and respect. The “I love myself no matter what” mantra of the New Age is meaningless unless it's accompanied by action that matches that sentiment. If you love yourself, you treat yourself right. And if you treat yourself right, that proves your self-love.

Well, that's what Peter Bregman and I claim in our provocative new book of that title.

This podcast is not underwritten by advertising, so I can experience complete editorial autonomy without worrying about pissing off the person paying the bills. Instead, I pay the bills, with your help. It's free for those who can't afford to pay, and supported by those who can. You can contribute to the growth and improvement of the podcast by . Click the “Support on Patreon” or “Donate” buttons on the right to help out.