Get a free copy of Sick to Fit!
Send me the book

When I was in 11th grade, I came in 3rd in the New Jersey Science League Chemistry II competition.

My grades were solid Bs, and I only did that well because I was good at following instructions for computing things like acid/base and redox reactions. I never really understood the reality behind those mathematical procedures.

But the spring of 11th grade was the time that all my friends and I were in hot pursuit of anything interesting or impressive that we could slap onto a college application, and when I heard about the state chemistry contest, I entered at once.

I didn't expect to garner any medals, but a lot of my friends would be on the bus, and anyway it would probably be good practice for the AP chemistry exam that I was hoping to pass a couple of months later.

The contest was on a Saturday afternoon, at some high school a couple hour's drive away from my own. A bunch of us gathered in Columbia High School parking lot and piled into a small bus. Our teacher, Mr. Ghegan, was there to see us off.

Mr Ghegan was famous for being the funniest teacher at Columbia.

His first lecture, a series of demonstrations of all the things not to do in chemistry lab (like secretly hooking up your lab partner's bunsen burner tube to the water faucet) had us all in stitches.

So we didn't take him that seriously when he shouted as we were pulling out of the parking lot, “If you don't know the answer to a multiple choice question, you should always choose ‘van der Waals forces' if that's one of the options.” 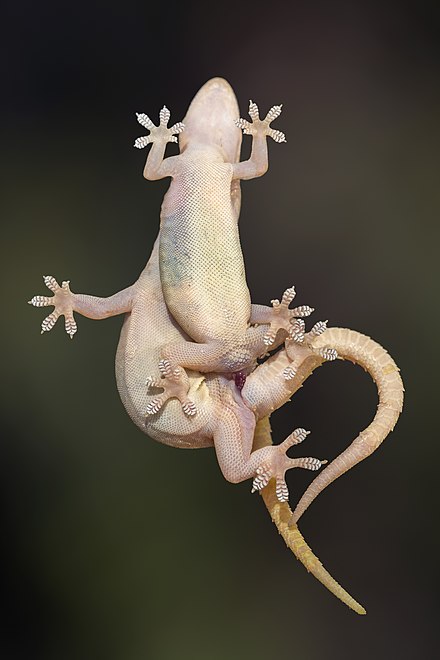 I did not know anything about van der Waals forces.

I had never heard of van der Waals forces before that moment.

I Googled the phrase just now, and was treated to the following definition courtesy of the Oxford English Dictionary: “weak, short-range electrostatic attractive forces between uncharged molecules, arising from the interaction of permanent or transient electric dipole moments.”

I have no idea what that means, except that it has something to do with how geckos can stick to walls (but not, apparently, waals).

I don't remember much about the test itself. Strangely, I recall with clarity that it consisted of 60 questions.

The other thing I remember is that I didn't know the answer to about 10 of them, which didn't seem at the time like it was going to portend anything good. I was competing, after all, against some of the smartest, most competitive, and nerdiest kids in the entire state of New Jersey. (Remind me to tell you one day how I contributed to our high school Quiz Bowl team's loss in the finals to Livingston High (Wait! Wait! Don't Tell Me! host Peter Sagal's team) by misspelling onomatopoeia. Never mind — looks like I just did.)

The other other thing I remember is that fully four of the questions that completely stumped me had one multiple choice answer in common.

Can you guess what it was?

We didn't find out our scores for a couple of days, but like overeager grade grubbers everywhere, we debriefed the test endlessly on the bus ride home. What was the molecular weight of the compound in question 9? Which of the gaseous compounds in question 52 had the weakest attractive forces between particles? What was the total pressure in the flask after 24 minutes in question 17?

Then we got to talking about the questions that could have been answered, van der Waals forces.

I hadn't a clue about any of them, so I did what Mr Ghegan suggested. I answered “van der Waals forces” to every single one.

Matt and Michael were appalled at my ignorance. They had both understood the questions in great detail than I, and yes, there was one question where van der Waals forces was the correct choice, but just one. The others had different answers.

The only problem was, Matt and Michael couldn't agree on those answers. They had a far deeper affinity for math and science than I did, and could marshal evidence I couldn't even comprehend.

As you know, I blew them out of the water.

I beat everyone in the state, except for two kids whose identities I never paid attention to. (Hopefully neither was Peter Sagal. That would be kind of demoralizing.)

Turns out that Mr Ghegan's advice, which he may or may not have been kidding about, was spot on.

The answer to every one of those questions was “van der Waals forces.”

I got 57 correct answers out of 60. Which means I got lucky on 3 out of 6 non-van-der-Waalian questions, and nailed all 4 of the van der Waals ones.

But I achieved this distinction only because I didn't know enough to confuse myself.

The Fine Art of Overcomplication

The principles of healthy living are not.

But too often we complicate things by focusing on the tiniest details: “Should I use dried or fresh turmeric in my morning smoothie?”

The unknown hypotheticals: “What if I have the EPO4 gene?”

The trivial discrepancies between experts: “But Dr Greger says to eat four Brazil nuts a day, and Dr Esselstyn says to avoid all nuts.”

Even when we focus on essentials, we can drive ourselves batty by trying to juggle all the balls at once when we haven't yet learned how to throw a single ball from one hand to the other: “Starting tomorrow, I'm going to begin each morning with 15 minutes of meditation, then 20 minutes on the treadmill. I'll make overnight oats the night before, and in the morning pack a green salad for work…”

When Josh and I started coaching people in the Big Change Program, I noticed something in his approach that changed the way I worked with clients.

He kept coming back to a single question: “How's your Movement going?”

No, he wasn't talking about composing symphonies, or shitting.

He was talking about the person's implementation of their walking / jogging / running protocol.

Someone would get on a coaching call and talk about how they had been eating really well, but lately they had slipped. They were eating oily restaurant food for lunch instead of choosing the healthy wrap they had brought with him.

I would immediately jump into coaching them on their thoughts and behaviors at the moment they decided to eat out. That was the issue, after all – what they did in that moment. Right?

Josh would take a different approach. He wasn't so interested in the specific details of that particular dynamic. ‘

Instead, he'd ask: “When was the last time you went for a run?”

What I learned from Josh is that once you have the ability to eat healthy and you've laid down any sort of track record, it's the Movement part of your protocol that locks the new way of eating into place.

Charles Duhigg calls exercise a “Keystone Habit” in his book, The Power of Habit. Meaning, in many cases it's the thing that changes everything else.

When you're moving your body on purpose with purpose – which can be walking, jogging, hiking, running, playing a team sport, playing a racquet sport, skiing, surfing, horseback riding, cycling, swimming, dancing, gardening, pushing a wheelchair with your arms, or any one of a thousand other variations – that habit makes every other positive habit easier to maintain.

Move vigorously, and produce BDNF, also known as Miracle-Gro for your brain, so it works more efficiently and you get smarter.

Move vigorously, and metabolize the Flight or Fight chemicals in the way they were intended, rather than letting them stew in your bloodstream and poison your body and mood with stress and anxiety.

Move vigorously, and increase your sleep drive so you enter slumberland shortly after your head hits the pillow.

If your health habits are slipping, it's easy to go down rabbit holes. It's tempting to read another self-help book or try the latest adaptogenic herb or watch another YouTube channel.

I'm all for self-help books – I write them myself, and I always enjoy hearing from people whom they've helped.

I'm a big believer in adaptogens, when they are truly the medicine for what ails us.

And the University of YouTube has probably taught me more than four years of college and six years of grad school (but not more than you, Mr Ghegan!)

But most of the time, you don't need to learn more, think more, or consume new medicine to solve your lifestyle problem.

You just need to move more.

It's like life is a multiple choice test, and one of the answers to just about every question is “Move more.”

“More” as in more consistently, or with more intensity, or for longer periods, or more regularly.

If you always start with movement, you'll get the right answer an awful lot of the time.

Certainly a lot more than if you choose the clever-looking answers that will take you down long and winding rabbit holes.

What are Your van der Waals Forces?

If you haven't cleaned up your diet yet, then your van der Waals forces might be Oatmeal For Breakfast. Nail that down, and you have constructed a foundation for everything else to follow.

If you stress eat, and experience anxiety on a regular basis, then stress-proofing will be your van der Waals forces. Practice calming breaths, do progressive muscular relaxation twice a day, and add the Basic Eye exercises from Stanley Rosenberg's Accessing The Healing Power of the Vagus Nerve and the self-comforting techniques developed by Peter Levine.

But there will almost always be one thing.

One area of focus.

One right answer that cuts through the confusion and self-generated complexity and gets you back on track.

Let the smart kids come up with all the fancy answers.

If you keep answering with your version of “van der Waals forces” whenever you're stumped about a lifestyle habit, you'll ace the test.

Mr Ghegan and I will be proud of you.

And the geckos won't fall off the walls.

Mr Ghegan died in 2012. To give you a sense of the man, here's a page where many of his former students shared their memories of him.

Just for kicks, I accessed the Chemistry II tests and answer keys from 2011-2018. Not once was “van der Waals forces” the correct answer. I hope this finding does not invalidate the whole damn article.

New cohort beginning Fall 2021. Live classes will be 10-11:30am US Eastern Time on Wednesday, so this is a Europe- and Africa-friendly class. Also for folks in the US, Canada, and Central/South America who have flexible mornings.

This podcast is not underwritten by advertising, so I can experience complete editorial autonomy without worrying about pissing off the person paying the bills. Instead, I pay the bills, with your help. It's free for those who can't afford to pay, and supported by those who can. You can contribute to the growth and improvement of the podcast by . Click the “Support on Patreon” or “Donate” buttons on the right to help out.